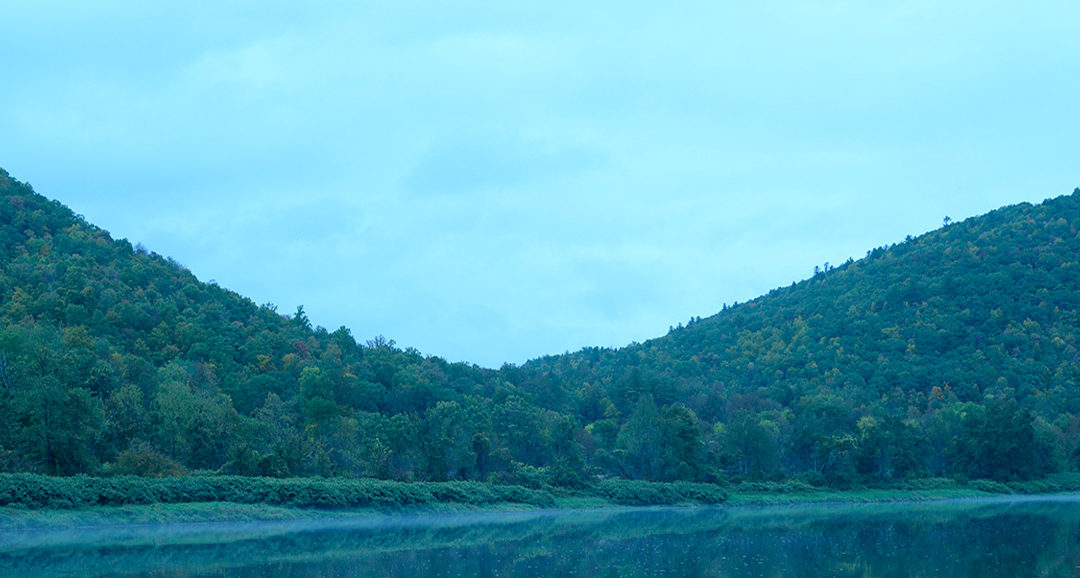 How many reasons can you possibly think of to justify a fly fishing trip, especially one far from home?

So here we go.

Well the opportunity to grab my son at the end of his tour and kick on a bit in NYC and visit my sister was too good to pass up.  So I planned to arrive a few days before my son’s school tour was over and do some fly fishing.  The question was where exactly?

I did what we all do and got on the interweb and searched for the best places to fly fish in New York.  High on the list was Roscoe, in the Catskill Mountains. The web site for the town proudly declaring that Roscoe was indeed “Trout Town USA”.  So a promising start to my search.

Further searching found me looking at the website for Baxter House, a fly fishing outfitters, shop, lodge and guiding service run by Ken and Michelle Tutalo.  Looked good enough to me so I booked in for four days of guided fly fishing.

I arrived at Baxter House, Roscoe NY on the 24th of September, the day after flying in from Sydney, jet lagged and very weary.  The next day I would be drift boating down the main stem Delaware River. “Get a good nights sleep Nick” said Ken, “ it’s 12 miles of drift over about 8 hours, long day”.  I had booked in to stay in the lodge at Baxter House, a pleasant and comfortable room next door to the fly shop and a short walk to the centre of town. 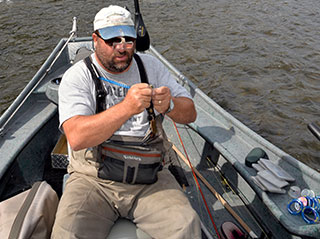 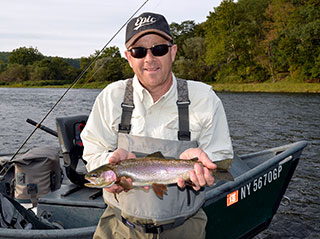 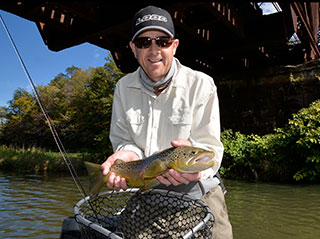 The first days fishing didn’t start well. Didn’t sleep a wink.  Initially presented with a heavy three nymph rig sitting below a bubble, I think I crashed every second cast into the rod for the first two hours. I called for a time out, and ate a small amount of a stupidly large ham and salami roll I’d bought that morning from the local cafe. Food helped, the casting improved and it was not long before I had my first Delaware River Rainbow trout hooked.  Notice I said hooked. Not landed. Not yet anyway.

That first rainbow took off across the river (about 60 metres wide) and didn’t give an inch until all 30 metres of fly line and about 15 metres of backing were stripped off the reel.  Ken was laughing, saying “they’ll do that to ya, those Delaware rainbows”.  When the fish finally arrived at the boat and was safely netted, we had a 17 inch (43cm) ‘bow.  I’ve caught the odd rainbow that was bigger, but never faster and never so keen to get as far from the boat in the shortest possible time.  And that’s how the afternoon went, a couple more rainbows about the same size and just as crazy.

That first day was all about nymph fishing as the summer and autumn had been so hot and dry, the autumn insect activity and thus dry fly fishing had up to that point been quite poor. Ken was waiting for the cold nights to kick in and some desperately needed rainfall to activate the bugs.

Day two fishing was a change of location to the West Branch of the Delaware River, just below the Cannonsville Reservoir. Today I was with one of Kens most senior guides, Zac Anderson.  The West Branch is a very different stretch of water, somewhat narrower and, on this day discoloured and cooler water from the reservoir compared to the clear waters of the Main Stem on the first day. Again we were to drift the river over about 16km, and Zac had it in mind that we would streamer fish all day looking for big Browns along the edge of the grassy, undercut banks.

They like their big streamer flies in the US and it is not a technique I was familiar with for catching trout.  The fly we used most was a “Circus Peanut” (a Kelly Galloup Pattern)an articulated, 2-hook creation about 9-10 cm long that would not looked out of place decorating your Christmas tree.  But the big brown trout love them.  After a couple of hours casting into the bank and the first catch of the day was a 21 inch (53 cm) specimen. 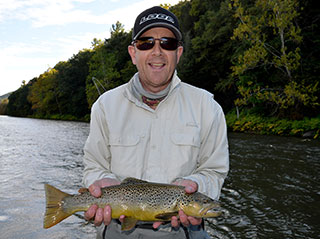 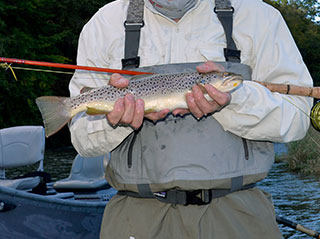 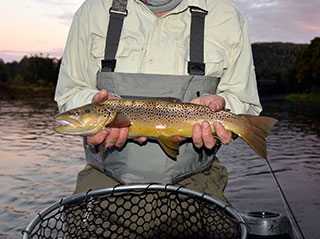 After about three hours of this, the right arm was weary from the constant casting with a heavy guide rod, so I switched to my trusty Epic 580. We rigged this up with a Circus Peanut also, admittedly a heavy rig for a 5-wt, 8’ rod, (I thought perhaps too much for the Salsa Red Glass wonder stick), but with the application of some big wide loops, a bit of water hauling, the streamer hit its target, and another excellent brown was netted. You can clearly see the Circus Peanut streamer in the photo.

Another rig change as the sun started go down. This time a #2 Baxter House black woolly bugger set about 45-50 cm below a No. 10 olive woolly bugger I’d brought from home.  The classic little minnow being chased by a slightly larger minnow.  The brown trout loved this too, one good fish taking the larger bottom bugger and another fish right on dark choosing to smash the smaller bugger.

Day three and I was back with Ken on the Delaware Main Stem. Today more multiple nymph fishing but with the added promise of some well overdue dry fly fishing. A couple of cooler nights and Ken was confident that we would see bugs, and hopefully fish cruising and sipping.

We started out with the nymph rig and landed a couple of nice rainbows and also a few Fall Fish or Chubb.  These natives behave a little bit like trout, rising to the surface for a dry or taking a nymph.

The action slowed down as we drifted over calm, wide pools and as the American’s say, we “changed things up” a bit and went to a two-streamer rig.  We set this up on the Epic 580 with a #2 Baxter House black woolly bugger set about 45 cm above a #2 Baxter House white woolly bugger. This did the trick as a Small-Mouth Bass grabbed the top fly.  As I reeled the fish in, another bass was seen eying off the bottom fly. Almost a double hook-up. 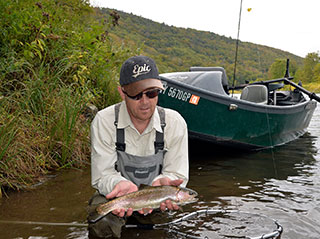 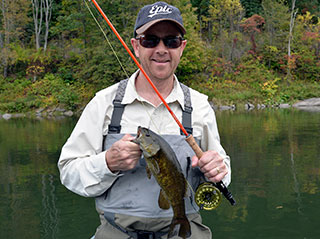 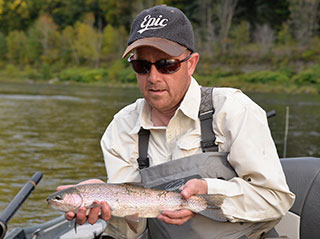 Around the middle of the day we came across a wide, slow moving pool and it was clear that it was time to put on a dry fly. There were sipping browns and rainbows everywhere feeding on Olives. Dry fly fishing on this river system is all about matching the hatch, so on went a #18 Olive pattern. Almost three days of casting big nymph rigs and streamers, to then go to a tiny dry, well it took a little while to get into the groove. These fish were sensitive to say the least and a couple of harsh presentations scared a few fish off.  Eventually though, a few soft presentations drifted nicely down over the target fish and just like the first day, a Rainbow ate the dry only this time heading off directly downstream. Well into the backing and the fish wasn’t giving in so we drifted downstream a little. But something was wrong, it felt like the fish had wrapped the line around a rock as it would not retrieve at all. It soon became apparent that the fish had become tail-wrapped and was coming back to the boat tail-first. They feel heavy that way. As you can see from the photo, this fish did not look too good from the experience, so a very quick photo and we managed to revive the beasty and release it.

Overnight, some welcome rain had moved in over the Roscoe area and the local water authorities decided to close the sluice gates on the reservoirs upstream on the East and West Branches. The water levels in the Delaware had dropped considerably as a result, so fishing was going to be tough.  Early in the day there was some dry fly fishing, a couple of hook-ups but nothing landed.  We had to drag the drift boat over a few very shallow riffles.

So a quiet days fishing on the last day of my adventure. No matter, more time to reflect on the overall experience and take in the landscape of the Delaware River. 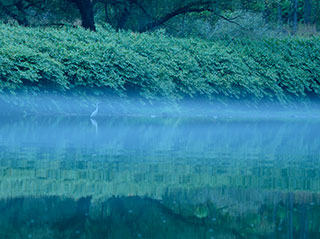 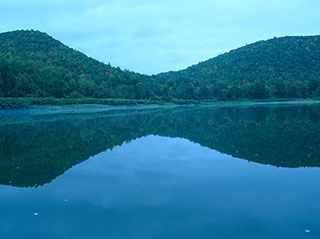